MCHUGH AND FARR SHOOT OUT FOR USC QLD TITLE 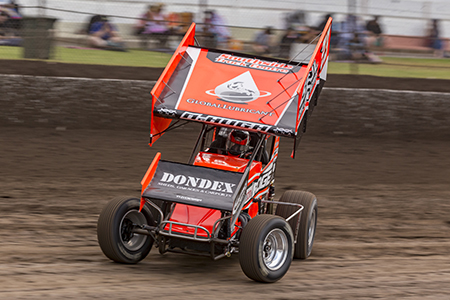 Miami QLD young gun Lachlan McHugh stands at the gateway to his biggest Sprintcar moment yet this Easter weekend, but first he has to contend with a 33-car field and a battle with a Speedway icon.

McHugh faces off with nationally decorated QLD based Sydney born icon Robbie Farr as the duo arm-wrestle over the two final rounds of the Ultimate Sprintcar Championship Queensland at Hi-Tec Oils Toowoomba Speedway.

Effectively, there are two titles on the line.

With a two-track three-round Easter weekend ahead McHugh and Farr are two of a horde drivers contesting both the Easter Tri-Series between Hi-Tec Oils Toowoomba Speedway and Ausdeck Patios Archerfield Speedway, and the Ultimate Sprintcar Championship QLD final two rounds at Toowoomba.

Farr comes into the final USC QLD two rounds with an incredible record so far.

The weekend prior in Murray Bridge he successfully defended his Ultimate Sprintcar Championship South Australia.

And now he seeks to successfully defending his USC QLD Championship.

McHugh though, has other ideas.

So too does 2019 Australian Sprintcar Champion Andrew Scheuerle.

Scheuerle made a sporadic trip to Valvoline Raceway in NSW last weekend after a couple of seasons away from the iconic Parramatta venue and came away with a credible fourth place finish.

It was a result that bolstered the Toowoomba local hero’s confidence and reminds him that he’s every bit a chance for stealing the USC QLD points lead from McHugh and Farr.

There’s every chance he could knock off his first ever Ultimate Sprintcar Championship QLD Series but the young gun and the racing veteran are remarkably tied on points coming into the weekend.

This time last season he won at Hi-Tec Oils Toowoomba Speedway for the Easter weekend so he knows how to get the job done there.

“Hopefully we can be on the pace,” says proud Dad Jamie – a former Speedway champion himself, “we’ve got good speed this season and he knows how to win at Toowoomba. Robbie’s record speaks for itself but I think we’ve got as much chance as he does to get the win.”

A tremendous 33-car field has entered for the Good Friday and Easter Sunday battles including eight interstate cars from New South Wales and South Australia.

Coming into the final two rounds of the USC QLD – presented by BK Trading Australia – the top ten points situation is: