SMORGASBORD OF SEDANS THIS SATURDAY 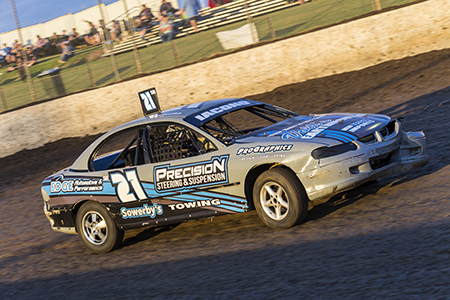 This Saturday night at the final IBRP Sportsman event of the season, four different divisions of Speedway Sedans will whet the appetite of the tin top fans.

Modified Sedans, Junior Sedans, Street Stocks and for the first time in two seasons, National 4s will all be part of the final event of the season.

Eighteen Modified Sedans have nominated for the event as driver and machine will contest the final round of the club championship. Current Queensland Champion Rodney Pammenter, will be joined by a host of local and visiting talent as the meeting doubles as a final shakedown before next weekend’s Queensland Title in Maryborough. Matty Smith, Shane MacDonald, Kerry Lack, Peter Gray, Tim Smith, Mick Langton will be only done if the locals being taken on by the visitors in Jeff Smith (Mackay), David Jacobi (Mount Tambourine), Kent Shelford (Maryborough) and the father and son team of Steven and Jamie Love from Brisbane.

A quality field of Street Stocks return for the Edge Automotive & Performance Mountaineers Cup, an event that was washed out on New Years Eve. Toowoomba’s own and nearly crowned Queensland Champion Robert Trapp leads the field which includes New South Wales Champion Peter Thompson from Kingaroy. Last start winner and arguably one if Queensland’s fastest Street Stock competitors Travis Hutchison, will make the trip from Maryborough vying for the $500 winners cheque that has been kindly put up by Edge Automotive & Performance who are located right here in Toowoomba.

A dozen Junior Sedans have nominated for this weekend’s fixture and the field is being led by the Victorian and Northern Territory Champion Ardie Jonic from Ipswich. Jonic has just returned from injury and will be hoping to not only win, but perhaps set a new one lap record as the old mark of 18.458 set by Joel Barkley hasn’t been touched since September 2015. Jonic will have plenty of opposition though from the lone New South Welshmen in the field Hayden Brims along with locals Jordan Cunningham, Mitch & Mason Pammenter, as well as visitors Ellie Peacock from Clontarf and Rockhampton’s Mason Cameron and Mareeba’s Erik Wallace who is a long way from home.

For the first time in two seasons, National 4s are back on the program and bring a wide range of cars not normally seen on the dirt. Tim Weir’s immaculate Ford Sierra RS500 Cosworth has to be seen to be believed. It’s like taking a walk back in time to when the fire breathing Sierra’s graced venues around the country like Bathurst, Lakeside and Sandown. But this Saturday night Weir will be joined by others including Brock Hancock in a Lancer, Jack Kay Altezza, Rodney Midolo in a BMW and a host of others.

Productions were also scheduled to compete this weekend, but due to low nominations being received coming off a grilling couple of weekends for state and national titles being held, have been remove from this weekend’s event.

General admission is only $15 this weekend and cars will be on track at the early time from 4:15pm.

Pic: Toowoomba TopGun Jarrod Iacono will be contesting the Edge Performance Mountaineers Cup in the Street Stocks this Saturday. (RobsSportPics)