FARR CLAIMS THE DOUBLE AT TBAR 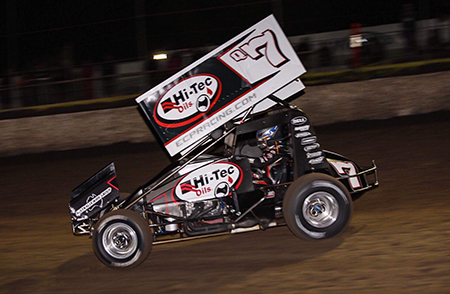 Farr started his campaign by posting a new track record of 10.550 seconds and subsequently qualified first ahead of a very impressive Ben Hilder who stunned onlookers with a 10.801.

In a perfectly written script, the top three in the championship in Farr, Luke Oldfield and Peter Lack all won their respective heats in the first round, while Mitty Gee, Tony Wynne and New South Wales newcomer Damien Hart filed wins in their second outings.

With Farr and Oldfield starting off the front row for the thirty lap final, the tension was palpable with Sammy Walsh paired on the second row with Ben Hilder while the outstanding crowd were stirred to backing their local hope in Peter Lack who would start from row three alongside Michael Saller.

Right from the outset, Farr looked good, but an incident for Brent Kratzmann in lap two ruined his opportunity to stay in the championship top five, while also spelling danger for Farr who only narrowly missed him on the next rotation.

Despite the track being so fast, the race was overloaded with position-swapping battles, some of which ended in disaster, with the next stoppage due to a tangle with Mitty Gee and Michael Saller in turn 2 on lap 13, which ended both their nights despite a partial red being opened for Gee to replace a damage header, but sadly just ran out of time before the restart.

Meanwhile at the front, Oldfield managed to pass Farr on two occasions while Sammy Walsh was poised to capitilize on any mistakes in third.

However the heartbreak of the night would come on lap 19 as Peter Lack who was travelling in fourth tangled with Lockie McHugh who’d driven from twelfth, ending Lack’s chance to maintain third in the overall championship.

Lapped traffic would create some great opportunities for Oldfield to pounce in the final third of the race, but never made it stick, while Walsh was never out of the picture, however Farr would defend his lead to bank the $7,500 winners purse in addition to the $5,000 USC Series win.

“To win all three championships in SA, Sydney and now here is the best reward for Nick (Speed) and Neil (Kelly) who’ve worked really hard to keep producing great race cars for me, so that’s a great result.”

The Queenland Ultimate Sprintcar Championship begins again on September 15 at Toowoomba which also be the first Sprintcar event on the south east Queensland calendar.

Toowoomba Top Guns dominated the support divisions with Keith Blatch reigning over Aaron Kelly and Kurt Wilson in the Lightning Sprints who displayed some great racing in a very unique twin-feature format, while Dalby’s Terry Leerentveld held off Sam Gollschewsky and Klinton Hancey in a great night and big field of Modlites.

Toowoomba’s final night of racing is next Saturday for the final IBRP.com Sportsman Event, with nine divisions on the card.