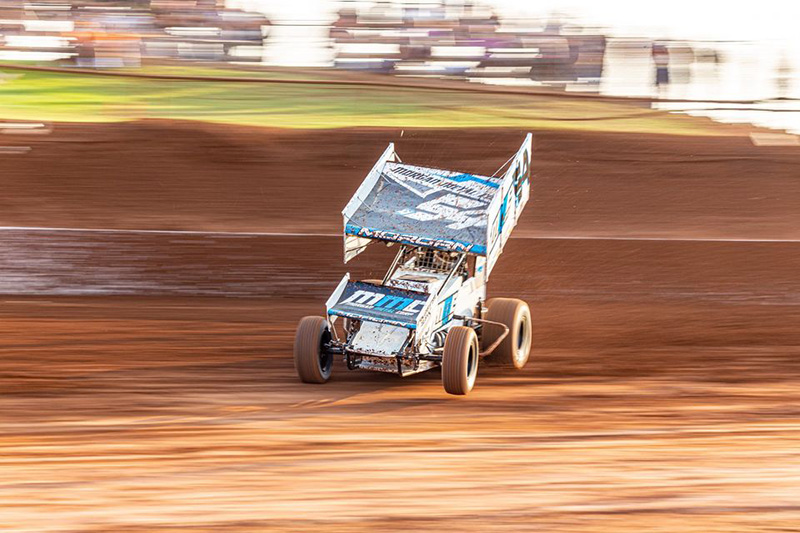 Hi-Tec Oils Toowoomba Speedway returns this Saturday night for an epic season opener featuring over 120 drivers across seven different divisions. After the previous season was cut short, we fast forward seven months to have a terrific field of twenty-three Sprintcars locked and loaded for the SRV Road Freight Services Challenge that now pays $3,500 to win.

The increased prize money has attracted a host of the states very best drivers including Luke Oldfield, Brent Kratzmann, Aaron Kelly, Allan Woods, Callum Walker and Kevin Titman, but all eyes will be on Lachlan McHugh, who debuts in the NQ7 for ECP racing. Only two weeks ago at official practice, McHugh’s first night in the NQ7 saw him lower the existing one lap record around Toowoomba to 10.467 seconds.

A solid field of sixteen Production Sedans will contest the opening round of the Fox Shocks Labs Australia Series. Australian Champion Joel Berkley heads the nominations and comes off a win last weekend. Adrian Stott is also among the nominations and finished second to Berkley last week and will be on the charge among a host of locals including husband and wife duo Chris & Amy Evans, Ash McKellar, Thomas Fuller and Norm Townsend.

Despite being the first show of the season, the Modlite division has attracted an impressive field of twenty-five drivers who are sure to put on an entertaining and exciting show. Terry Leerentveld, Sean Rose, Scott Lehfeldt, Nathan Politch, Klinton Hanceey and Rodney Pammenter are some of the leading contenders looking to run in some early season form. Fourteen Formula 500’s return to the high banks for a shake down before their Queensland Title. Liam Williams, Kristin Brown, Ronnie Barber and Brady Argels will face tough opposition from a host of drivers including locals, Brock Thornton and Tarhlea Apelt who broke the Formula 500 lap record at practice two weeks ago.

The fun and excitement of Street Stocks racing that compete in both directions return for their opening round of the Immortal Rollcages Series. Fourteen drivers will contest round one including former Queensland Champion and local hope Robert Trapp and former New South Wales champion Peter Thompson. Toowoomba’s Bailey Payne will lead a field of almost a dozen Junior Sedans (drivers aged between 10 and 17) in round one of the Speedway Sedans Australia Toowoomba City 5 Star Series. Rounding out the program will be the RSA Outlaw Sedans who have attracted twelve nominations.

General admission tickets are limited to 1000, and with more than 50% now sold make sure you pre-purchase your tickets online now to avoid disappointment.