TEXAN ON TOP AT TOOWOOMBA 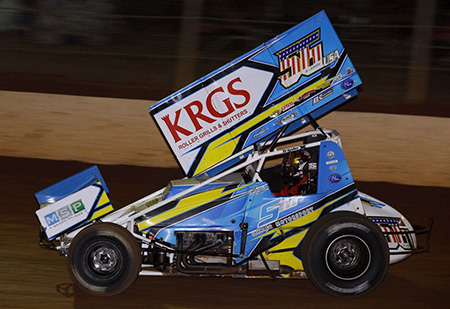 Texan import Aaron Reutzel has claimed his first QSS World Series Sprintcars victory on debut, driving from the seventh row of the grid at Toowoomba’s Hi-Tec Oils Speedway for round seven of the championship.

Despite qualifying 19th in the twenty-nine car field, Reutzel steered the #USA56 Saller Motorsport TripleX to a heat race win and a runner up, accruing enough points to bounce back and lock into the 13th spot for the 35 Lap Main Event.

Farr assumed the lead from the outset and was able to fend off some vigorous charges from Madsen on a very wide and racey surface that was probable to be taxing on tyres. Meanwhile, Reutzel had miraculously made his way to 7th by lap five, and showed no signs of slowing his progress.

Brent Kratzmann took a large tumble on lap nine to be the first to bring the race to a pause, and shortly after the restart, Shaun Dobson would relight the ambers for a minor spin.

The second restart triggered multiple skirmishes through the field, both between Farr and Madsen at the front and the race for third between Goodyer, McFadden, Luke Oldfield and the emerging Reutzel, who skilfully dislodged the pack by lap seventeen to enter the flight for the lead.

Traffic was re-introduced into the story with fifteen laps remaining, and after five rotations of the top three remaining unchanged, Reutzel finally made his move with a slider on Madsen out of turn four, and two laps later repeated the move on Farr to attain the lead.

With Reutzel in control, McFadden and Goodyer re-entered the battle for the podium with Farr and Madsen, with McFadden making it as high as third, before Madsen blew a right rear with two laps to go, and McFadden also sustaining a puncture as he greeted the white flag.

Reutzel however was unchallenged and drove to a convincing victory and claimed the American Racer Hard Charger award in the process, while Farr held on for 2nd ahead of Jock Goodyer in 3rd. Oldfield was the first local home in 4th ahead of Hickman, Lockie McHugh, Lucas Wolfe and Jack Lee, while McFadden and Madsen would still finish 9th and 10th respectively.

“I’m just glad to win a race for the Sallers. They’re a family owned team and I feel like I’ve let them down a couple of times (in Australia) and I’m just happy I could finally get a win for them,” Reutzel said from victory lane. “I’m really glad we could make this overnight twelve-hour trip (from Sydney) worth it for them. I wouldn’t even ride in the truck for twelve hours, so I got a flight, so I have to thank the team for driving all the way up here.”

James McFadden completed round seven on 1757 points and has managed to retain the series lead by 43 marks over Kerry Madsen on 1714, with the pair increasing the gap over the remainder of the ladder.

QSS World Series moves on to Maryborough’s Fraser Shores Speedway on Tuesday night for the first ever appearance at the venue, and the first time for the majority of the contracted drivers, setting the scene for an unpredictable night for round eight.