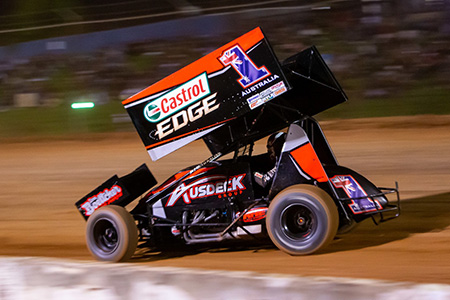 Australian Sprintcar Champion Andrew Scheuerle kicks off a hectic 2019/2020 season at Hi-Tec Oils Toowoomba Speedway this Saturday night and preparations for the first hit-out at “T-Bar” come at the same time as news of another new challenge for the A1 are unearthed.

Scheuerle will take his Ausdeck Patios & Roofing / Castrol Racing #A1 J&J on the road to compete for the first time in the second annual Hi-Tec Oils Ultimate Speedway Challenge held between Toowoomba, Parramatta and Murray Bridge which kicks off next month.

“The Challenge concept works well for us to get on the highway and show off the Australia One,” he says, “I think every Australian champion has an obligation to the fans to race whenever and wherever possible and the chance to race at Valvoline Raceway and Murray Machining & Sheds Speedway Murray Bridge as well as Toowoomba is the perfect way to do that.”

His immediate focus however is this Saturday night’s first round of the USC QLD Championship at the annual “Carnival of Power” presented by Pengelly Trucks and Trailers.

A cracking field has entered for the USC kick off as Scheuerle attempts to improve on last season’s third place in the USC QLD behind Robbie Farr and Lachie McHugh which came right down to the last round at Toowoomba in Season 2018/2019.

Having only recently returned from a gruelling and incredible 18-night racing safari in the USA where he competed in the biggest races on the planet including the Kings Royal and the Knoxville Nationals to name just two, Scheuerle is busily preparing the team for an equally hectic Australian summer as the defending national champion.

“It was an incredible opportunity for all of us,” he recalls of racing in the USA, “I can’t thank Andrew from AR Developments enough for that once in a lifetime chance. We learned a lot, raced a lot and saw a lot of America as a family and a race team. Now it’s time to get dinkum about our Australian schedule and our title defence though, there’s no place like home.”

The field that Scheuerle will face this Saturday night has some of the fastest pilots in the country on hand including former national champions, World Series Sprintcars Championship winners and USC Champions alike.

“It’s fantastic to see such a quality line-up at Toowoomba straight up,” Scheuerle admits, “anyone who gets the win for the USC QLD first round will have earned it. It’s probably the best way to get the season started and to come out firing.”

Nominations for this Saturday night (September 28) in the Carnival of Power include: