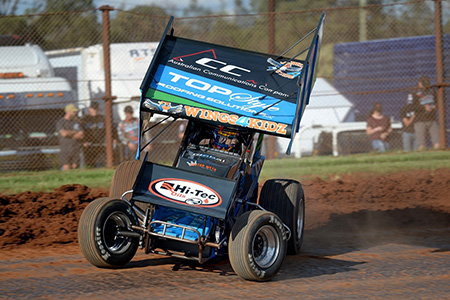 Collectively they are some of the hottest new talents in Australian Sprintcar Racing and they’re headed out on the road to contest the 2019/2020 Hi-Tec Oils Ultimate Speedway Challenge soon.

Last year’s Ultimate Speedway Challenge was superb, and fiercely contested across the three states and tracks with Sprintcars, Speedcars and Late Models.

The Late Model line-up has already been announced and is fierce to say the least.

The Sprintcar assembly of drivers who will compete in all rounds is both fresh and exciting.

Whilst the emphasis is definitely on the new faces of the sport there’s still a key master with the runs on the board defiantly protecting the gates to the palace.

Robbie Farr is the defending USC Champion and a gritty veteran who welcomes the challenge of the brat pack taking him on.

“These guys are the future of the sport. I love it when they come out on the road. The more challenges and the more challengers the better as far as I’m concerned. The Ultimate Speedway Challenge was a big success in its first year and I know it’ll be bigger this time. Having these youngsters out there makes it even more interesting,” concedes the Gold Coast based Sydney native.

Dumesny has several main event successes to his credit at the iconic Valvoline Raceway and the third-generation racer is in the best form of his career with a recent experience and speed building sojourn in the USA. Gaining experience racing with both his own team owned by legendary Dad Max and also South Australian onion farmer Wayne Rowett (plus in the USA good mate Scotty Males) Marcus has been clocking up the highway miles and building his versatility.

Michael Stewart is well versed in both Speedcars and Sprintcars and the second-generation throttle stomper has experience at all three of the USC Challenge venues – Valvoline Raceway Parramatta, Hi-Tec Oils Toowoomba Speedway and Murray Machining & Sheds Speedway Murray Bridge. Stewart is versatile and sharp as a whip and cannot be underestimated any time he is on track.

Mick Saller is set for his biggest year yet. The hard charging Sydneysider will take in American star Aaron Reutzel for the Ultimate Sydney Speedweek phase as a team-mate and along with Dad Mark learn plenty from the Texan. Having won an A-Main at the tough Archerfield Speedway and having gained plenty of experience on World Series Sprintcars in the past as well Saller is emerging as one of the most promising guns on the horizon.

Central Coast of NSW live-wire Alex Orr has also been perilously close to VR success and this year comes into the Hi-Tec Oils Ultimate Speedway Challenge with his best chance yet of a career breakthrough success. Orr is simply electric in a race car. Orr has a big year personally and with his passionate family team again fully committed to the cause he’s a car you cannot help but watch in any field he’s lined up in.

The contracted drivers will compete in all rounds of the series across SA, NSW and QLD at Parramatta, Toowoomba and Murray Bridge.

Organisers of the Ultimate Speedway Challenge are proud to welcome back and grateful for the support of Hi-Tec Oils for 2019/2020.