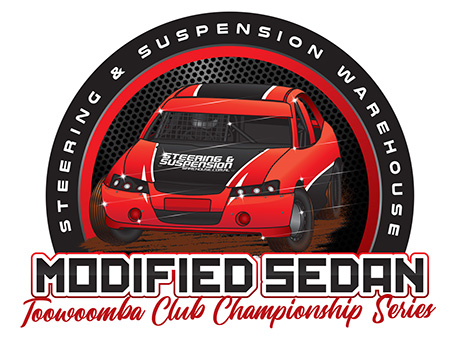 After the success of last season’s introduction of local club championship series for various divisions that saw an instant increase in car numbers, the Modified Sedans division in Toowoomba is set for a huge season with the return of the Steering & Suspension Warehouse Toowoomba Club Championship Series to be held at Hi-Tec Oils Toowoomba Speedway during the upcoming 2019/20 speedway season.

Dennis & Jodie Bullpitt from Steering & Suspension have graciously returned as the major sponsor and along with the local club have put up an extremely impressive prize pool for the 2019/20 season. Along with a minimum $1,000 to win at every round guaranteed, included prize money to the top five drivers each night along with tow money paid to everyone that starts each round, over $5,000 in series prize money will also be up for grabs to the top ten club members at the end of the series.

The Toowoomba club championship is being run by the local drivers association (Charlton Raceway Inc) in conjunction with Made Too Go Pty Ltd who operate Hi-Tec Oils Speedway and will be held over the following rounds:

With such a huge season planned, the club has decided to introduce a ‘drop your worst round’ to encourage maximum attendance throughout the season. The worst round must be dropped PRIOR to the Grand Final effectively making the Grand Final on May 9 the only compulsory round to attend this season. As racers we all understand that sometimes you just can’t get to a round, so this concept should be welcomed by all.

This is an exciting time for all SSA sedan divisions in Toowoomba, but this series is huge for Modified Sedans, a division that has become very popular with fans that consider Modified Sedans one of the most competitive and entertaining speedway divisions.

More information about the Modified Sedan Toowoomba Club Championship Series and how Street Stock drivers can be involved can be obtained by local club president and series organiser Ryan Harris.