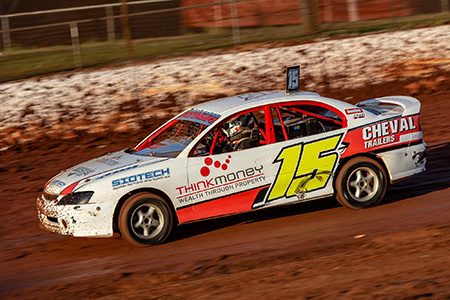 The first Production Sedan blue ribbon event for the season, the Toowoomba Steering & Suspension ‘$1,000 to win’ Dean Fraser Memorial will be held at Hi-Tec Oils Toowoomba Speedway this Saturday night.

Last season this event was rained out before a lap had even been turned, so this will become the first time the event has been run in Queensland.  BroMad Racing & the McGee family have continued to honour the memory of Brody’s father (Dean Fraser) for the past twenty three years through this memorial race in their former home state of Tasmania. But now that the family reside in Queensland and with the ever increasing costs of travel across the water to compete in the event annually, the family with the support of the Tasmanian speedway community have relocated this wonderful event to their new home track, Hi-Tec Oils Speedway in Toowoomba.

A wonderful field of twenty eight drivers will take part in the event which has attracted the best drivers from Queensland and across the border in New South Wales. New South Wales Champion Steve Jordan sits atop of the entry list, which also includes Josh Crang, Joel Berkley, Josh Arthur, Adrian Stott, Brody Fraser, Brett Barron and Stuart Fawcett. Joel Berkley has already tasted success this season with two wins from as many starts at Kingaroy and Gympie.

TASTY LINE UP FOR THE BRIMS CONCRETE SERIES

It's a tasty line-up for the Brims Concrete Super Sedan Series round this Saturday night at Hi-Tec Oils Toowoomba Speedway, presented by Ian Boettcher Race Parts.

In a field 'brimming' with Australian championships and QLD titles this Saturday night's action will be a wide open affair.

Whoever wins the Brims Concrete QLD Super Sedan Series round will have to seriously 'harden up' for success on the high banks of T-Bar.

WHICH WAY WILL THEY GO?

Unlike all other speedway divisions Street Stocks race in either direction. A coin toss decides the direction of racing as the drivers enter the track and this Saturday night  a fabulous list of Street Stocks have nominated for the opening round of the RMC Excavations Toowoomba Club Championship.

Eighteen drivers have nominated for this weekend, as they chase the club championship prize and get much needed lap time on the venue that will host the Queensland Title for the first time in history on 4 May 2019.

Racing is scheduled to commence at 5pm and if you can’t make it to the venue, you can check it out live on Clay Per View.