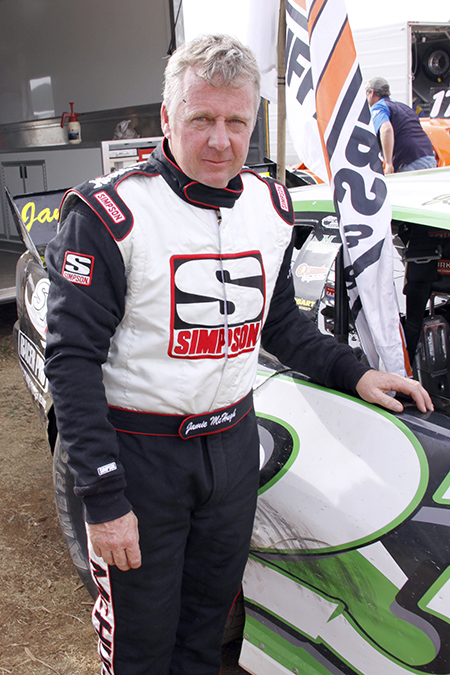 Jamie McHugh is the first Queensland Speedway legend to be honoured at Hi-Tec Oils Toowoomba Speedway for the 2018/2019 season.

The Miami (Gold Coast) former national champion will have his career celebrated this Saturday night as part of the season opening USC “Carnival of Power” proceedings on a night where his son Lachlan now has even more incentive to get the A-Main Sprintcar win.
Jamie McHugh was nationally revered and decorated in many forms of Speedway competition and although these days it’s his throttle stomping son that steals the spotlight the number 23 has been famous for several decades.

It wasn’t only on dirt that Jamie left his tyre prints with forays into Aussie Racing Cars at circuits and events like the Gold Coast 600.

Clay and dirt however were where he excelled and fans throughout the country were treated to some of his best performances, not just in Queensland.

1999/00
Winner of the NSW Championship and also Club Champion

In recent years McHugh has switched his racing emphasis to son Lachlan’s career swinging the spanners on the Sprintcar as the youngster began a rapid rise from rookie to race contender.

This Saturday nighty McHugh Jr has a legitimate chance to win the race that honors his Dad although there is a crack field of drivers from QLD, SA and NSW that might have something to say about that.

Entered in this Saturday night’s Ultimate Sprintcar Championship QLD (presented by Pengelly Truck and Trailer Sales) so far are:

Jamie McHugh is the first QLD Speedway Legend to be honored for the 2018/2019 season at Hi-Tec Oils Toowoomba Speedway this Saturday night.

Also on the program Saturday night are Ground Pounding Monster Trucks “Raptors Rampage” and “Buddy” plus the “Ultimate Fire in the Sky” Fireworks Display.

Tickets are available in advance through speedwaytickets.com.au