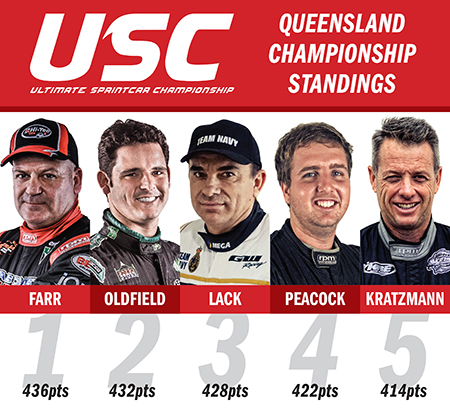 The Queensland Ultimate Sprintcar Championship points chase has now been adjusted to include the deduction of each driver’s worst round, with an interesting change to the top three spots heading into the Grand Final next Saturday April 21.

The top five drivers remain the same, however Peter Lack has been leapfrogged by Robbie Farr and Luke Oldfield who now fill the top two spots, with Lack in third and Jayden Peacock fourth and Brent Kratzmann fifth.

Lack was resilient despite the change in his position, responding with “we’ll just need to push harder then, wont we!”

“Strange things can happen in Sprintcar racing and we will just need to push hard but not too hard. The USC is something we’ve really strived to do well at and we’ve given it a fair crack, so it would mean a lot, especially with all our new sponsors in Mega Fuels, Kawana and Team Navy.”

The Grand Final event will also feature Fireworks along with Lightning Sprints and Modlites with the opening ceremony from 6pm. For details, check out the Hi-Tec Oils Speedway Facebook page and www.toowoombaspeedway.com