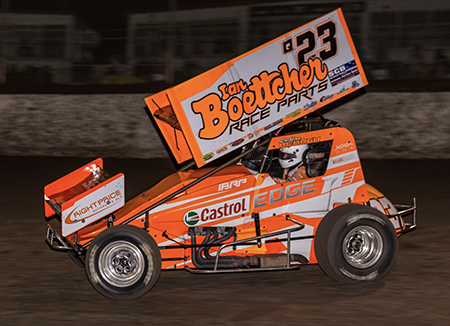 Gold Coast Young Gun Lockie McHugh has claimed a remarkable win at the Hi-Tec Hi-Banks with a green-white-checker finish over Robbie Farr and Bryan Mann.

McHugh started his night by top-qualifying in the Ian Boettcher Race Parts #Q23 and claimed a fifth and runner up in his heats which was enough to lock in a spot in the Gold Shootout and subsequently a pole position for the 40 Lap A Main.

Farr’s route to the front row of the feature was a much bigger challenge, qualifying in an unfamiliar ninth spot, and then working his way from fourth to first in his first heat, and claiming a fourth in his second appearance, but advanced from eighth to second through the shootouts.

Starting off the front row of the 40 Lap feature together, Farr got the upper hand over McHugh and led for the first 35 laps with only a few small stoppages, before Michael Saller spun on lap 36 and gave the opportunity for McHugh to get past Farr on the restart to begin a lead swapping frenzy to what appeared to be the chequered flag.

However, Andrew Wright had spun in turn one on the final lap whilst running fourth, and with the whole field bearing on him, the caution lights came on as the leading pair entered turn three as Farr passed McHugh for the lead on the final turn.

Just as everyone had thought the race was won, the field went back into formation, and the scoreboard returned to 2 laps to go, leaving the crowd speechless, and Lockie McHugh back in the lead for the restart.

The young Gold Coaster took full control and was never headed for the final two laps, claiming a popular win over Farr and Bryan Mann.

The Wingless Sprints rewarded the fastest racers on the night, with Dave Eggins leading from start to finish ahead of Michael Butcher and Brendan Webber.

The Modlites were in fine form with Scotty Lehfeldt making a pass on Klinton Hancey with only two laps to go to claim a win with Sean Rose advancing from the third row to hold down third.

The last major event for the Toowoomba season is staged for April 21, featuring the Grand Final of the QLD USC, plus Lightning Sprints and Modlites.